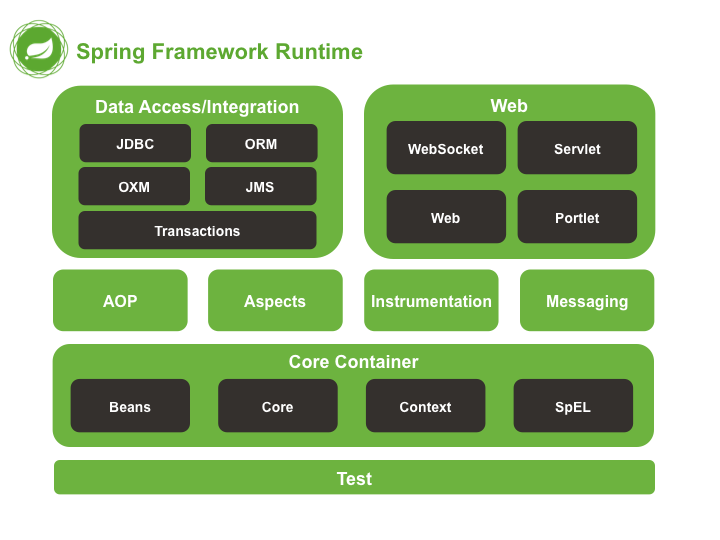 The Context (spring-context) module builds on the solid base provided
by the Core and Beans modules: it is a means to access objects in a
framework-style manner that is similar to a JNDI registry. The Context
module inherits its features from the Beans module and adds support
for internationalization (using, for example, resource bundles), event
propagation, resource loading, and the transparent creation of
contexts by, for example, a Servlet container. The Context module also
supports Java EE features such as EJB, JMX, and basic remoting. The
ApplicationContext interface is the focal point of the Context module.
spring-context-support provides support for integrating common
third-party libraries into a Spring application context, in particular
for caching (EhCache, JCache) and scheduling (CommonJ, Quartz).

The interface org.springframework.context.ApplicationContext
represents the Spring IoC container and is responsible for
instantiating, configuring, and assembling the aforementioned beans.
The container gets its instructions on what objects to instantiate,
configure, and assemble by reading configuration metadata. The
configuration metadata is represented in XML, Java annotations, or
Java code. It allows you to express the objects that compose your
application and the rich interdependencies between such objects.

ApplicationContext is a core concept (arguably the most important one) of spring used also in spring boot of course but and ideally hidden from the programmers in both cases, meaning that the programmer should not directly interact with it in a business code of the application.

Technically its an interface that has many implementations, the relevant one is picked depending on in which environment youre running and how do you configure the application.

So does it do? Its a class that basically is a registry of all the beans that spring has loaded. In general, starting up the spring mean finding the beans to load and putting them in the application context (this is relevant for singletons only, prototype-scopes beans are not stored in the ApplicationContext).

Why does spring need it?
For many reasons, to name a few:

Now there are other things implemented technically in application context:

However now you have an overview of what it is.

Spring boot application encapsulates the application context but you can still access it from many places:

Spring is popular for dependency Injection.
So all the bean definitions(Objects) will be created by the spring and maintained in the container. So all the bean life cycle will be taken care by spring container.

Some popular implementations are: