tensorflow – Can relu be used at the last layer of a neural network?

You can use relu function as activation in the final layer.

You can see in the autoencoder example at the official TensorFlow site here.

Use the sigmoid/softmax activation function in the final output layer when you are trying to solve the Classification problems where your labels are class values.

What you have asked invokes another question which is very fundamental. Ask yourself: What you actually want the model to do?- Predicting a real value? Or Value within a certain range? – You will get your answer.

But before that what I feel I should give you a brief on what activation functions are all about and why we use them.

Another purpose is to limit the range of output from a neuron. Following image shows Sigmoid and ReLU activation functions (the image is collected from here). 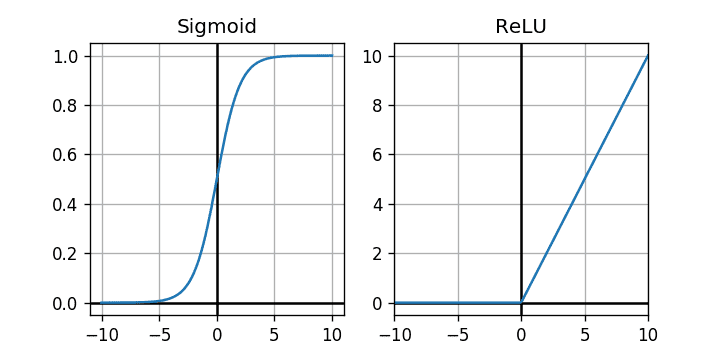 These two graphs show exactly what kind of limitations they can impose on values passed through them. If you look at Sigmoid function it is allowing output to be in between 0 to 1. So we can think it like a probability mapping based on some input value to the function. So where we can use it? Say for binary classification if we assign 0 and 1 for two different classes and use a Sigmoid function in the output layer it can give us the probability of belonging to a certain class for an example input.

Now coming to ReLU. What it does? It only allows Non-negative values. As you can see all the negative values in horizontal axis is being mapped to 0 in vertical axis. But for positive values the 45 degree straight line shows that it does nothing to them and leave them as they are. Basically it helps us to get rid of negative values and makes them 0 and allows non-negative values only. Mathematically: relu(value) = max(0, value).

Now picture a situation: Say you want to predict real values which can be positive, zero or even negative! Will you use ReLU activation function in the output layer just because it looks cool? Nope! Obviously not. If you do so it will never be able to predict any negative values as all the negative values are being trimmed down to 0.

Now coming to your case, I believe this model should predict values which shouldnt be limited from 0 to 1. It should be a real valued prediction.

Hence when you are using sigmoid function, it is basically forcing the model to output between 0 to 1 and which is not a valid prediction in most of the cases and thus the model is producing large loss and MSE values. As the model is forcefully predicting something which is not anywhere near to the actual correct output.

But what I think the model wants to predict intensity values which are likely from 0 to 255. Hence, there are already no negative values coming from your model. So in that sense technically there is no need of using ReLU activation function in the last layer as it will not even get any negative values to filter out (if I am not mistaken). But you can use it as the official TensorFlow documentation is using it. But it is only for safety purpose such that no negative values can come out and again the ReLU wont do anything to non-negative values.

tensorflow – Can relu be used at the last layer of a neural network?